October 2021 saw us return to thinking about the Junior Tens Tors event held in the summer term. This was a welcome return as the previous 2 years had been cancelled due to the pandemic. The children were offered a taster walk to see whether this type of activity was something they would lke to do. Two groups of children from our 3 Federated Schools spent a Saturday walking 7 miles across the moor. During the walks they had the chance to try out some of the skills they will learn if they choose to try out for the team in the spring. Everyone had a great time and hopefully learnt something from their experience as well as having lots of fun. 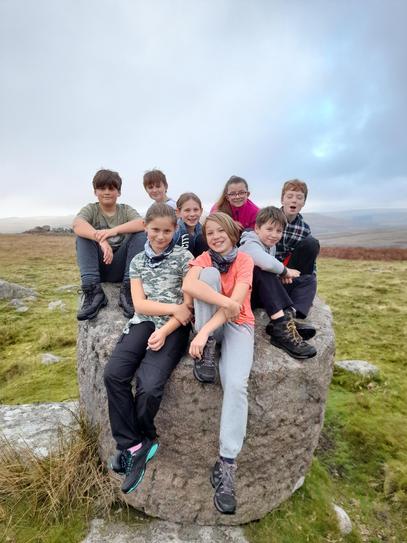 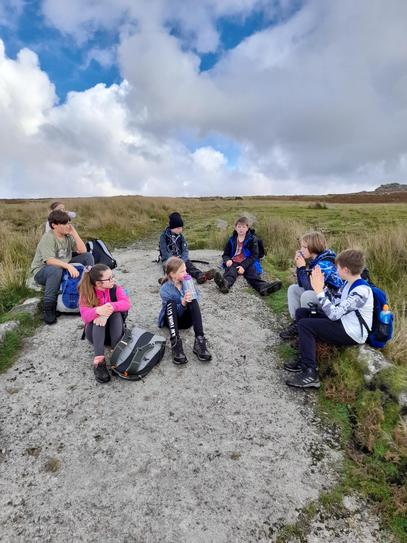 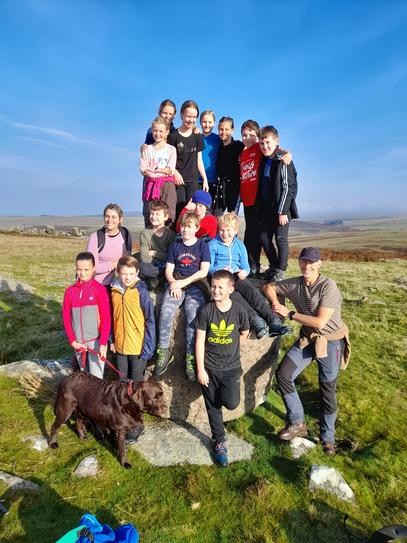 On Friday 21st and Saturday 22nd June, 3 teams of Year 6 children from Moorsway Federation (The Erme, Cornwood and Shaugh Prior Primary Schools), took part in the Junior Ten Tors Challenge.

The Challenge involves walking to 10 different tors on Dartmoor over one and a half days, covering a distance of 18 miles. Although supported by adults from the schools, the children have to navigate themselves around the moor.

The three teams of children along with their adult helpers started their adventure at Cadover Bridge on Friday morning. They were soon navigating their way across Dartmoor between their chosen tors. The weather was near perfect and the children successfully followed their route and met with the other teams at the campsite near Princetown at about 5 o’clock. They had walked over 12 miles to get there. Once at the campsite they put up their tents and cooked their tea on trangia camping stoves.  After an evening of entertainment from children from the 7 schools, and being eaten alive by midges, it was time to get some well-earned rest before day 2 of the expedition.

Everyone was awake very early and by 8am all the tents were packed away and all 3 teams from the Federation combined to walk the second day together.

By lunch time the last tor was in sight. In the distance the children could see the matchstick like figures of parents eagerly awaiting their return.

By 12.15 it was all over. The children trudged up the last tor, Leeden Tor, to complete their challenge, very proud of their achievements, if a little tired.

On Friday 8th and Saturday 9th June 2018, two teams of year 6 children from The Moorsway Federation navigated themselves around 10 of Dartmoor’s tors.

The children from The Erme Primary School in Ivybridge, Cornwood C of E Primary and Shaugh Prior Primary were taking part in the Junior Ten Tors event. The event is held every year and the aim is for teams of 8 year 6 children to navigate themselves to 10 different tors over a day and a half covering approximately 18-20 miles. Each team is accompanied by 2 members of school staff and the children camp out on the first night.

After 3 months of training, the children met at Cadover Bridge on the 8th June, excited and ready to face the challenge. The weather was ideal for walking, a little misty to start with but by the  afternoon the sun had come out. Both teams reached the campsite near Princetown in the late afternoon. After putting up their tents and cooking themselves a simple meal it was entertainment time around the campfire.

Fortunately day two of the expedition followed a similar pattern with the early morning mist surrounding the campsite soon burning off in the sun. After packing away tents the children trudged to their last few tors before meeting their proud parents at Leeden Tor , with a sense of pride in what they had achieved.